BE A CHAPTER DIVERSITY ADVOCATE

Promote your Chapter commitment to Diversity

The charitable Chapter Diversity Advocate is the preeminent chapter partnership role in building diversity and inclusion with One In Tech. Through sponsorship and collaboration, chapters can invest in the mission. Chapter support will demonstrate a public commitment to DIVERSITY within the technology education and workforce pipeline. Chapter Diversity Advocates effect immediate impact.

For each Chapter Diversity Advocate, OIT individualizes our initiatives to serve the chapter’s own territory. The chapter can select a particular Young Leaders In Tech, SheLeadsTech, and/or WeLeadTech educational event, project or curriculum to be offered to their chapter as well as targeted schools, community groups, or other audiences within their territory. One In Tech will do all the local outreach and event planning, as well as communication, pre- and post-promotion, record-keeping, reporting, and documentation. Through the Chapter Diversity Advocates sponsorship program, chapters can ensure that OIT services in cyber workforce development, youth education, and overall diversity-building can impact their own immediate communities, making the impact very meaningful and personalized for their chapter.

Partner with One In Tech as a Chapter Diversity Advocate

Knowing its members and chapters are visionary leaders, ISACA made this philanthropic investment in OIT to build diversity and inclusion. As a sponsorship program, Chapter Diversity Advocates make a donation to the OIT Foundation. OIT relies on donations from chapters to ensure the cyber and tech fields are strong, innovative, and inclusive. Through donations, chapters can literally change the world. Donations can be made online, or by check or wire. Please donate today!

Chapters can also sponsor OIT by using ISACA Chapter credit via the Chapter Care Credit program. As some ISACA chapters hold monetary credits with ISACA headquarters, One In Tech has collaborated with ISACA to enable the chapters to utilize the dollar-for-dollar value as a donation to support the Foundation. To sponsor with ISACA Credits, contact One In Tech. 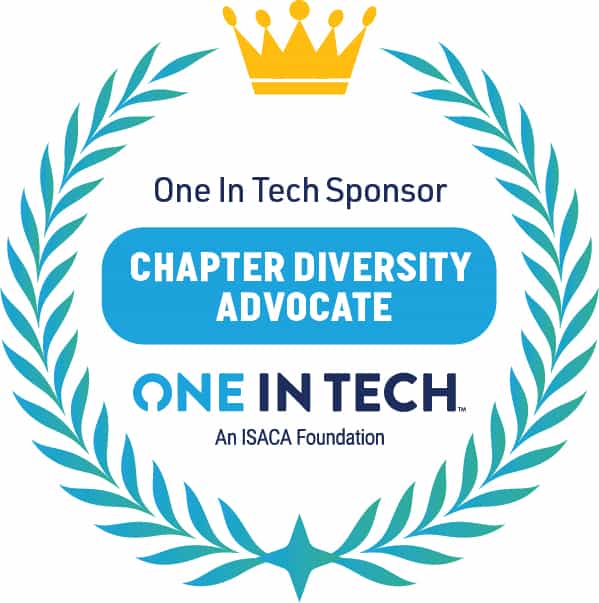 Event Sponsorships: Up to 5 OIT events with logo and name on materials and outreach

ISACA Conference Registration: Up to 5 free registrations to any of ISACA’s Conferences. Designated for chapter members of under-represented demographics

OIT Newsletter: Featured in up to 3 OIT newsletters

Press Release: Inclusion in up to 3 global, national, and regional ISACA and/or OIT Press Releases

ISACA Newsletter: Featured in up to 2 ISACA membership newsletters